If It's Wednesday, it's the Papal Audience 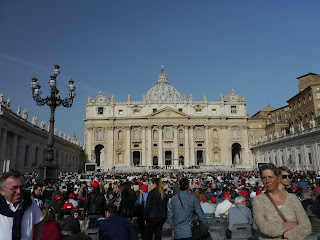 Dr. C. and I had tickets to the papal audience today, and we got there around 8:30---this is the scene.  Due to security concerns, streets around St. Peter's were blocked off, our Uber driver did his level best to get us there as close as he could.  Not only are there people sitting in the chairs, but ringing the seating area, there were hundreds of people (without tickets) waiting for a glimpse of Papa Francesco.  At about 9 a.m. a cardinal started reading off the names of the pilgrims who were there, from each country in Italian, then came Cardinals who spoke in their native languages to welcome their pilgrims  Cheers rang out from each set of pilgrims as their affiliation was called out.  We had a group of teenagers from France next to us, and they did the wave when their school was called.  Also, we were amazed at the number of teens/college age kids here. 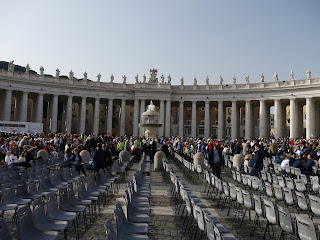 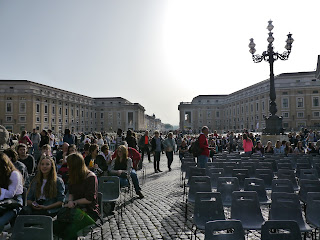 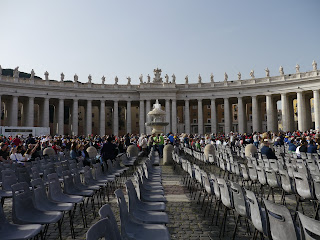 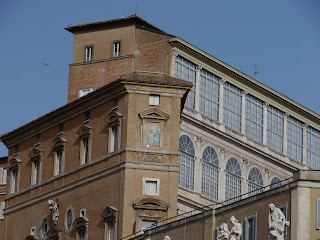 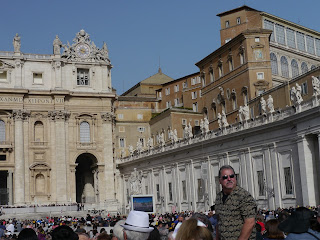 No matter what your religious beliefs, hearing this holy man speak, watching him kiss babies, joking with the crowd, and appearing to have the time of his life, is something I wanted to experience.  Although we weren't close, I did get to see him (there are huge TV screens positioned all over the square so you can see him) 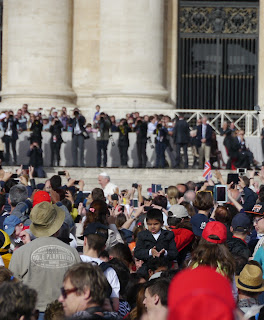 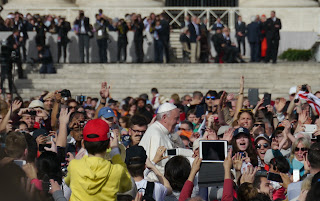 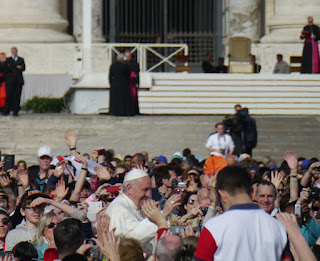 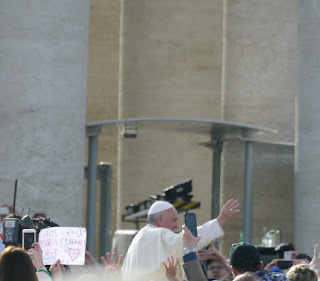 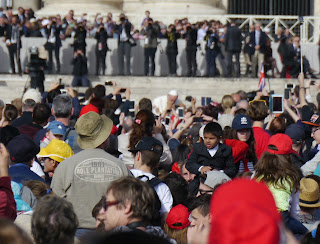 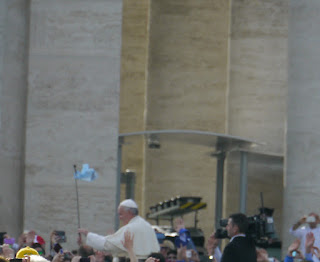 Although the audience doesn't start until 10 a.m., around 9:30 a roar goes up in the crowd, they have spotted il Papa, and are cheering him to come their way.  This is a man who loves a crowd, especially children; parents were handing their children up onto the Pope-mobile so that he could bless them, but he gave hugs and kisses as well. 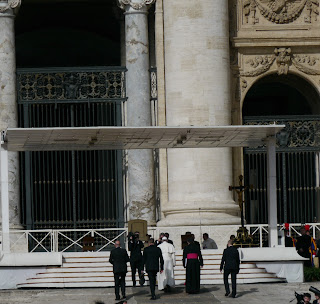 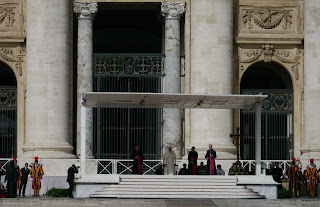 Once out of the Pope-mobile he strode to the covered area on the steps of St. Peter's.  From here he welcomed all the pilgrims, and then read his homily in Italian.  I was surprised how much I understood, but this Popes' message is simple:  Jesus/God loves you.  One quote that struck me, was:
Jesus was mercy incarnate.  Would that we would all walk like He did, helping the poor, feeding the hungry, and pardoning our enemies.
Pope Francis has declared this as a Jubilee year of Mercy, opening the holy doors at St. Peter's and the 4 other major basilicas in Rome.  (St. John Lateran, St. Pauls' outside the walls, Santa Maria Maggiore)  Pilgrims are coming from around the world to walk through the holy doors to experience mercy.  To quote the Pope:  “the Holy Door will become a Door of Mercy through which anyone who enters will experience the love of God who consoles, pardons, and instills hope.”
If you want to read the whole message click here 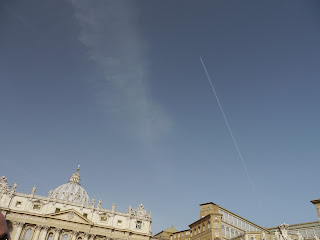 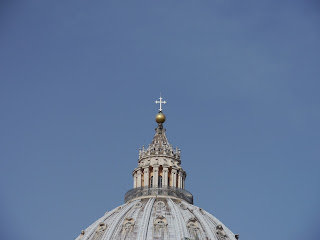 All in all a pretty awesome way to spend the morning.  When it was over, we sat in our chairs waiting for our several thousand friends to depart, thankful for this experience.
Just FYI, security here in Rome is tighter than I've ever seen it, with machine gun armed guards stationed outside every major site along with police stopping scooters, and cars to check them, and thousands of other police, and Carabinieri checking everyone.
If you are interested in attending an audience (about 2 hours) you can get tickets free of charge click here for instructions or click here to reserve through the Church of Santa Susanna.  Although the tickets are free, it is wise to bring a donation.

Posted by diane phillips at 5:11 AM