Baseball is Back, I Still Don't Know What Day it is, so It's Ballpark Food 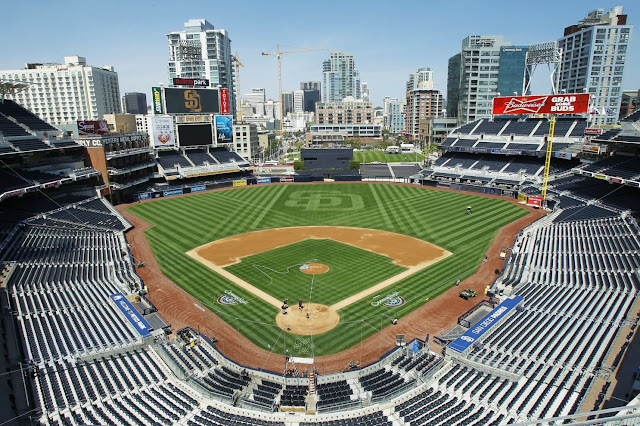 Baseball is back; albeit with empty stadiums, or those filled with cardboard cutouts behind the plate and down the right and left side of the fields.  My favorite has been the Korean baseball teams that had stuffed animals in the stands--- 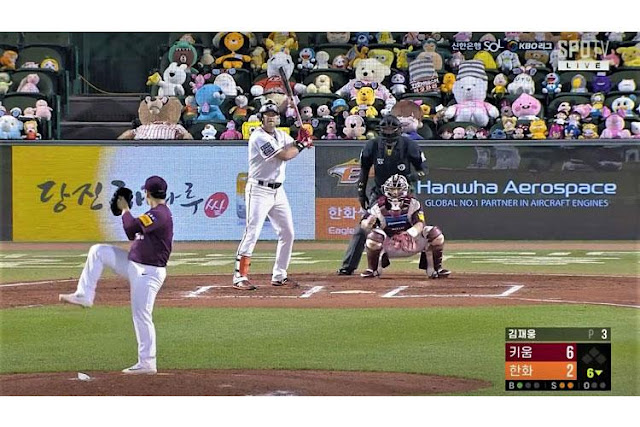 I've got a crush on these Teddy bears, check them out on FB or Instagram.
So, having a sports writer for a son, and a dad who dragged us to every brand of sports in Boston, you join in.  As a kid, my dad would make us keep score so that he knew we were paying attention.
For our dining pleasure on Sunday afternoon, while we were watching the Padres vs the Diamond Backs, I decided we could imitate being at the game and I'd make sausage and peppers.  This is a pretty simple dish, but it can go so wrong, with the wrong sausage.  Use Italian sausage for this, no breakfast links, or bratwurst or Andouille---it just doesn't work.

Put the sausage and water into a microwavable dish, cover, and cut a few vent holes in the plastic wrap.  Cook for 5 minutes on high.  You can also do this on the stove top in skillet.  What you are doing here, is almost cooking the sausage through--it takes less time that doing them in a skillet on the stove top and the sausage is juicier.
Preheat the grill or a grill pan, and grill the microwaved sausages, until they are cooked through, about 3 to 4 minutes, turning to brown evenly.  Set aside.
In a large skillet, heat the oil, add the onion, and saute until it begins to turn translucent. 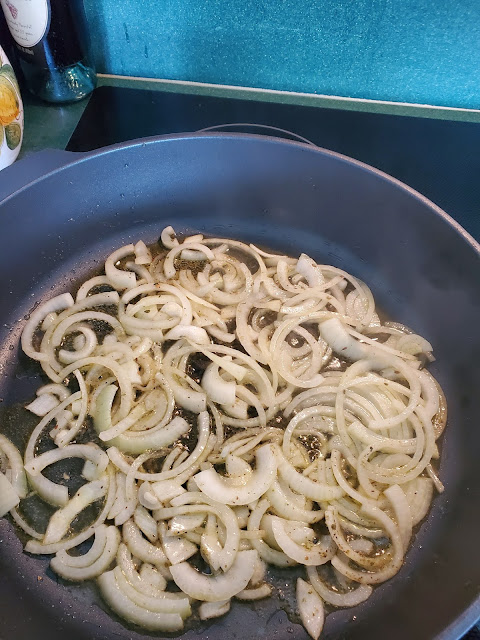 Add the peppers, and oregano, season with salt and pepper. saute until the peppers are softened. 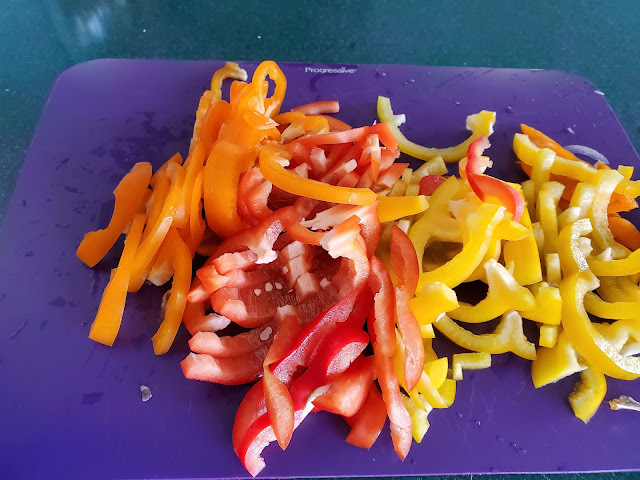 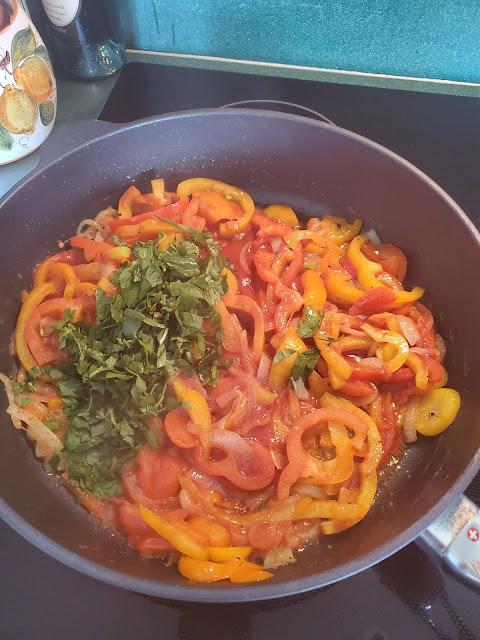 Add the tomatoes, basil and parsley, and simmer for 10 minutes.  Add the sausages back into the pan, and simmer another 5 minutes. 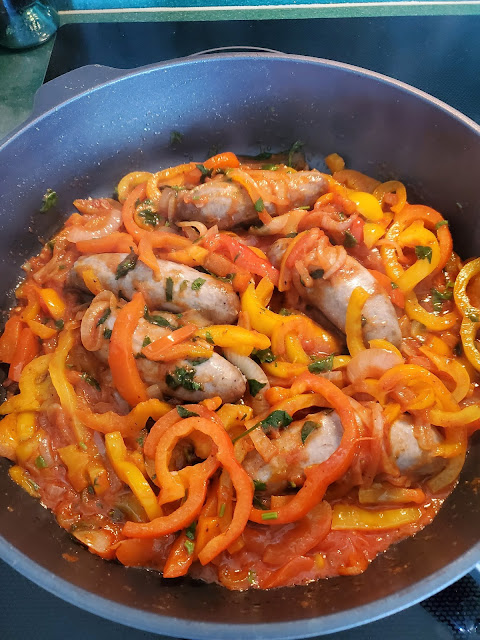 Season with salt and pepper, serve on soft Italian rolls and pretend you are in the stands cheering on your team.
Cook's Note 1:  It can be difficult to find Italian peppers, they are long and thin, and authentic for these sandwiches, but they can be hard to find outside of a metropolitan area.  Here in San Diego, Specialty Produce has them in stock. They tend to cook up faster since they have a thinner skin.  If you can't find them, colored bell peppers work really well here, as you can see.  Don't use green peppers, the flavor just isn't what you want.
Cook's Note 2:  At the ball park you might not get peppers with tomatoes, because they are making the peppers and onion on a flat top grill.  It's up to you whether you use the tomatoes or not---we like it this way, but it's really a personal taste decision.

So our team lost, and I decided that sausage and peppers was a bad luck lunch, but that doesn't mean that I won't make it again since it's summer and there is a baseball.  ⚾
Posted by diane phillips at 11:41 AM 1 comment: 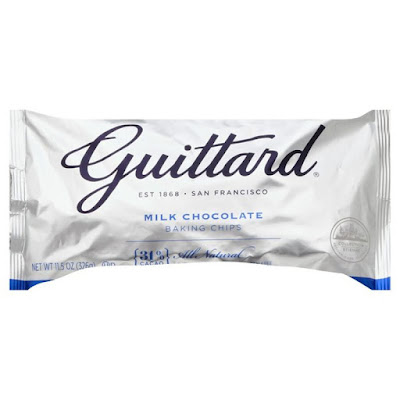 So, I confessed in another post that cookies are my downfall---given an empty house, I would eat every cookie I could find.  One of my favorite store-bought cookies is Tates' Bakeshop Chocolate Chip cookies.  These are crisp chocolate chip cookies, that stain your chin with buttery goodness.
The recipe for these cookies in the Tate's Bakeshop Bakery Cookbook doesn't produce a crisp cookie---I've tried my darndest to get them there, but they don't get to that crispy consistency.  BUT, the good news, I've finally gotten their recipe to a point that I love them (which is unfortunate since I can't stop eating them). These cookies are thin, with a crispy edge, but a chewy center.  The other night I made them, and even our son, who is the chocolate chip cookie monster said they were my best effort ever.  Cook's Note here, we are more partial to milk chocolate chips in these cookies, but you can use semi-sweet or white chocolate in them if you prefer.  The other note is that using salted butter gave me a more flavorful cookie---go figure after years of culinary school, and teaching, it seems that salted butter in cookies has resulted in Nirvana.

Chocolate Chippers
Depending on the scoop you use, this should make 36 to 48 cookies 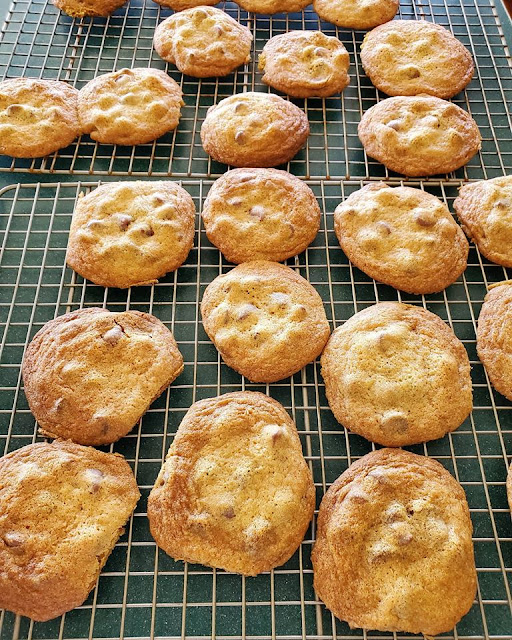 So, I have no idea what day it is in our quarantine, but I do know that we are in, and when we go out we wear masks, and we social distance.  That is the only way we can flatten the curve.  After the 4th of July, I realized that we'd have 2 weeks till the next wave happened, and here we are in California, basically closed down again.  Stay safe and stay well. 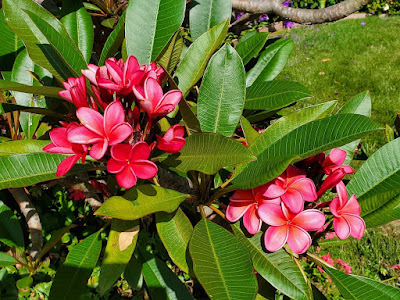