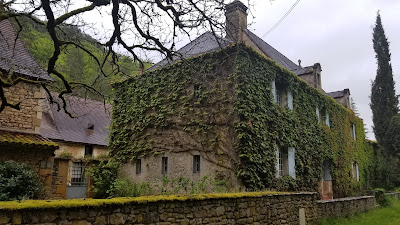 10 years ago I taught at an 18th century country manor here in the Dordogne called La Combe en Perigord owned by Wendely Harvey, former publisher of the Williams Sonoma Cookbooks and her husband, Robert Cave-Rogers.  It was a magical week, I taught 3 classes, and in between we were visiting pre-historic caves, starred Michelin restaurants, watching ducks being butchered, and walnuts being crushed into oil, as well as hunting truffles.
Wendely sold La Combe several years after her husband died, and La Combe is now a hotel.  Dr. C. and I fired up the Mercedes on this dark, rainy day and headed there to see it again. 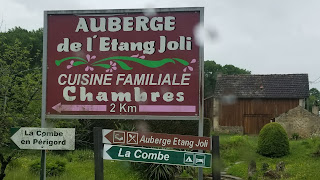 To the left you can see the old sign for La Combe en Perigord, the 'new' hotel is the big sign.  When we pulled up there were no cars in the parking lot, and I'm assuming they don't open for a while since the weather has been cold and rainy this week. 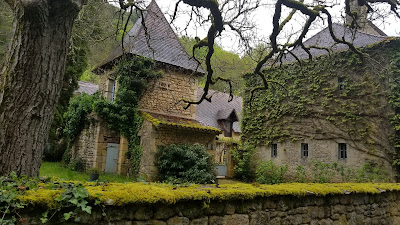 The road we took to get here was an adventure; Google maps has been quite a wild ride.  We had thought we would go in from Les Eyzies where the prehistory museum is, but we went in a back way, over the river, and through the woods, on narrow graveled lanes, through people's yards.  It's all an adventure. 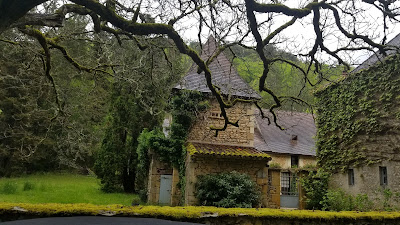 After this trip down memory lane, we headed to Les Eyzies, and the prehistory museum.  This area is riddled with caves, and paintings and many artifacts have been found here due to the limestone which has preserved the fossils. 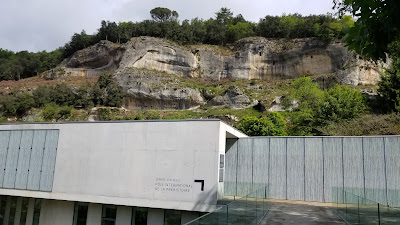 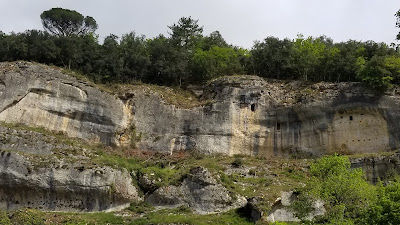 Each day on these driving trips there is a set map with detailed directions for visiting towns, and villages as well as stops for coffee and lunch.  We decided to try one of the places recommended for lunch 90 minutes away which was a great choice.  In the middle of nowhere, we found a lovely restaurant with an all British staff---who knew?

After a double caffe au lait, we were on the road back to our hotel to have a bit of a rest before dinner.  Tomorrow we visit the caves of Lascaux and move on to Brantomme. Ciao for now.

Posted by diane phillips at 8:35 AM