Cooking Without a Net 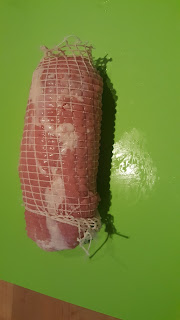 Although pork is king here in Umbria, when I was at the market the other day, I picked up a veal roast, with no idea how I would fix it. I've stated before that the kitchen here is limited, but I'm making do with what we've got; thus cooking without a net (or backup)
This morning, I decided to stuff the veal with some roasted artichokes preserved in oil that I had bought when we first arrived, and then braise it in the oven. 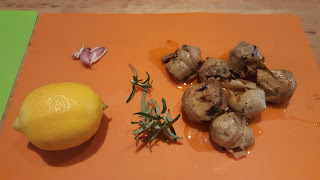 First up the stuffing, garlic, rosemary (because I forgot to poach some sage from the garden at the enoteca) lemon zest and the artichokes. 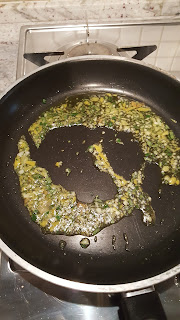 Sauteed the garlic, lemon zest and rosemary in a bit of oil.  Then added the chopped artichokes. 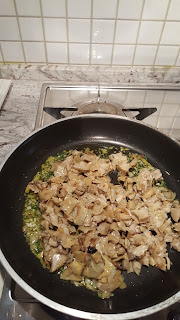 Seasoned with salt and pepper, then let them cool. 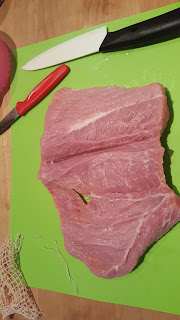 My not so great plan ran into a snafu when I realized I had no butchers' twine to tie this baby up, and no silicone bands either---but this is an adventure, so I plodded on.  I cut the veal so that I could stuff and roll it up, next time I will just cut it in half (if I have no twine) and stuff it that way. 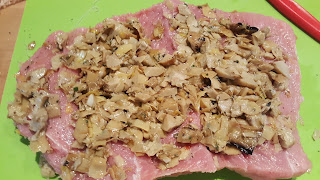 Sprinkle the meat with salt and pepper before stuffing and rolling it up. 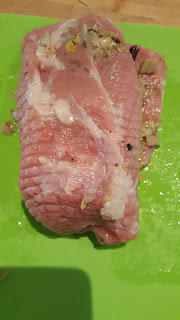 Not bad, but I so wished I had some twine--- I knew that I would get some pork in here, so I took some leftover pancetta and the leftover seasoned olive oil from the artichokes and sauteed the pancetta. 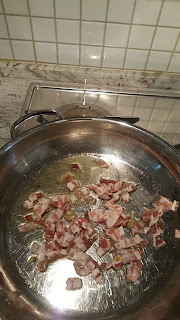 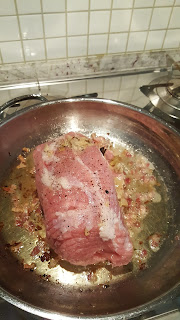 When the pancetta was crispy, I added the veal to brown on all sides --- without butcher's twine this was a trip. 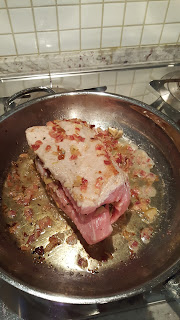 At this point I added the juice of 1 lemon and some chicken broth for the braise, and it's now in the oven for 1 hour at 325.  This would be a great slow cooker meal, too!  I surrounded the veal with some of the potatoes that I bought at Hypercoop on Monday, and when it comes out of the oven, we'll have a salad with it.  I will bet that it would be good cold, too. 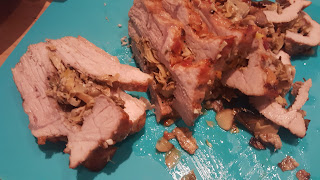 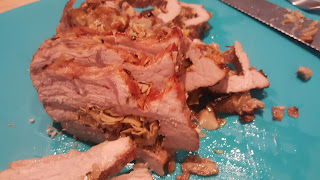 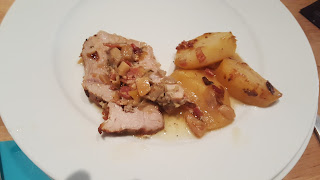 A lovely pan sauce flavored with lemon, artichoke and pancetta tops it off.  No need to do anything else except dig in.   Wishing you a buona notte from Spello.

Posted by diane phillips at 6:00 AM